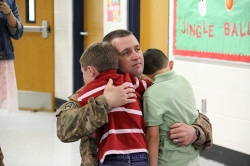 Two Len Lastinger Primary School students just had the best day at school they could probably have ever imagined. They thought a visit and presentation from Author Eric Litwin was going to be the highlight of their day. What they didn’t realize was one more special visitor was waiting just outside to join the assembly. Their military dad surprised the boys, returning from his nearly-year long deployment to Afghanistan.

“Being able to surprise them means so much to me,” Joiner said. “It’s been a long time.”

He said they have been able to email and Skype during the deployment, but it’s still hard being away.

Third grader BB and first grader Noah were enjoying Litwin’s presentation with their classmates in the gym when it was announced someone else special had arrived. It took several seconds for it to sink it that their dad was actually back in the United States. But when they realized it really was him standing in the gym, both boys ran and jumped into their dad’s arms.

When everyone caught their breath, they were asked what they were going to do with their dad, after they checked out early from school, of course. Both boys agreed, “Ice cream at Dairy Queen first, and then we’ll wrestle!”

He and wife Stacy also have a four-year-old named Timmy.